Public Involvement began in 2002 with the two communities connected by a deteriorating causeway critical to both shore communities that depend on tourism and the ability to move large numbers of people seasonally.   Six public information centers were held to allow for stakeholder input into the bridge design and lighting, materials used in the bridge design, the aesthetic design of the bridge, the touchdown areas in each of the municipalities including landscape design and materials. The stakeholders included public elected officials, administrative staff, business owners, Chambers of Commerce, emergency services, NJDOT, NJDEP, Army Corps, home and condominium owners, fishermen and boaters.    Numerous special interest groups were identified and meetings were held to resolve issues identified from the stakeholders.  The major areas of concern were traffic mitigation, emergency access and evacuation routes, detours, road closures, visitor center closure and relocation, environmental concerns, endangered species, bike/pad access, aesthetic issues for bridge design and lighting, fishing piers, canoe and kayak access, and the design of a new visitors center.
The project encompassed the redesign and closure of roadways, elimination of a traffic circle, business access changes, and extension of bike routes that tie into The East Coast bike trail.  Web site information was written with project updates and schedules were maintained on the NJDOT website. Each of the towns and counties linked to the information.  Flyers, questionnaires and information cards were provided at the numerous Open Houses and special meetings. The end result of this extensive public outreach and involvement with the communities resulted in great community support for an extremely complex project. 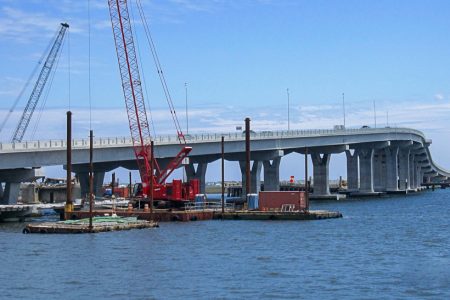